Equity markets around the world have been under pressure for the last week. Declines have been relatively broad based, but the most notable cracks have come in interest rate sensitive sectors such as Utilities and Real Estate, and defensive sectors such as Health Care. This indicates that the breadth of the current bear market retreat continues to widen. Investor concern that central banks may remain hawkish in the face of a slowing economy has ramped up again this week, with the US 10-year treasury note yield climbing from near 3.60% toward 3.95%. The Bank of England has been steadily walking back its dovish pivot, talking about more interest rate hikes and indicating its emergency QE program is set to end on Friday October 14th. Meanwhile, stronger than expected US nonfarm payrolls and producer price inflation continue to support the case for a hawkish, inflation-fighting Fed.

The coming week brings more inflation numbers from the US, EK, EU and China along with retail sales reports from around the world and Chinese Q3 GDP. Incoming data may continue to be viewed through the lens of what it means for central banks and their monetary tightening programs.

The main event of the coming days is the start of earnings season with an initial focus on Banks, Transports (airlines and railroads), Personal Products, and large caps across a number of sectors. Highlights include: JPMorgan Chase Friday, Bank of America Monday, Netflix and Goldman Sachs Tuesday, and Tesla Motors on Wednesday.

Key themes to watch for in this quarter’s earnings season include: the ability to pass on higher costs to customers (which helped Pepsi beat the street yesterday) versus margin compression, the impact of exposure to the soaring US Dollar, the impact of exposure to struggling European and Asia Pacific economies, the impact of higher interest rates, and any inventory issues such as those warned about by Nike and suggested by major retailers holding early sales this week. As is often the case, guidance may be equally or more important than the headline numbers.

In this edition of the Equity Leaders Weekly, we preview earnings season for the US Banks and at the impact of rising interest rates on Utilities. 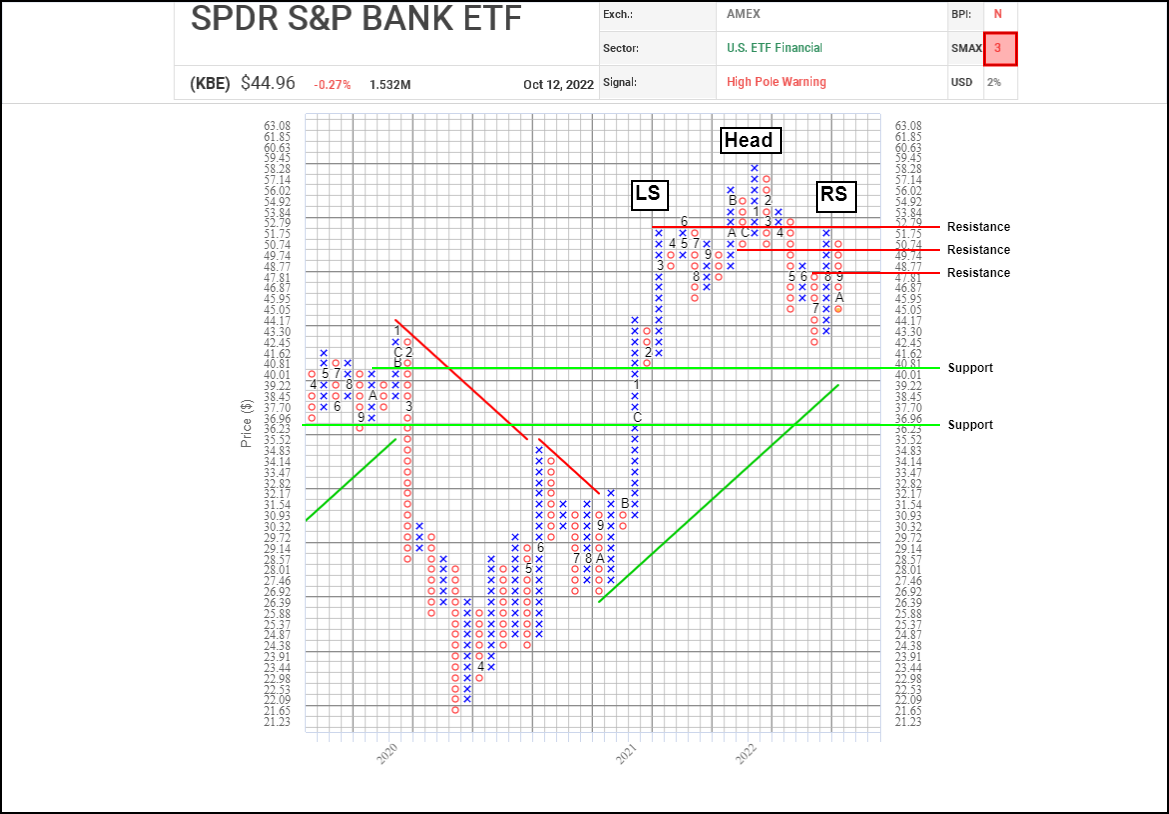 As is generally the case, US financials are scheduled to be the first group to report results in large numbers this quarter, starting with the biggest banks, along with the regional banks, and investment companies (brokerages and asset managers).

Looking back to when Canadian banks reported results six weeks ago, earnings were a mixed bag, with traditional North American banking holding up reasonably well but with loan losses on the rise. The weakest area was investments with a slowdown in investment banking and weak stock markets dragging on results. Not much has changed in the last six weeks, the stock market has been up and down, central banks remain hawkish and economic reports have been bumpy with stagflation continuing.

This 2% chart of the SPDR S&P Bank ETF (KBE) indicates that the banking sector peaked back in January then declined for six months. A summer bounce peaked at a lower high in August and since then the banks have been under distribution, generating a bearish High Pole Warning on the 2% chart and a symmetrical triangle (a sign of consolidation within a larger downtrend) on the 1% chart.

The most troubling thing about this chart is that it looks like the right shoulder of a bearish Head and Shoulders Top has formed. A breakdown below $41.60 would confirm a big top is in place and a new downtrend has started. It would take a close above $52.80 to call off the pattern with a double top breakout.

Next downside support appears near $40.00 where a round number and an uptrend line converge with previous column highs and lows, then a previous low near $36.25. Initial resistance appears near $48.75 based on a 3-box reversal. 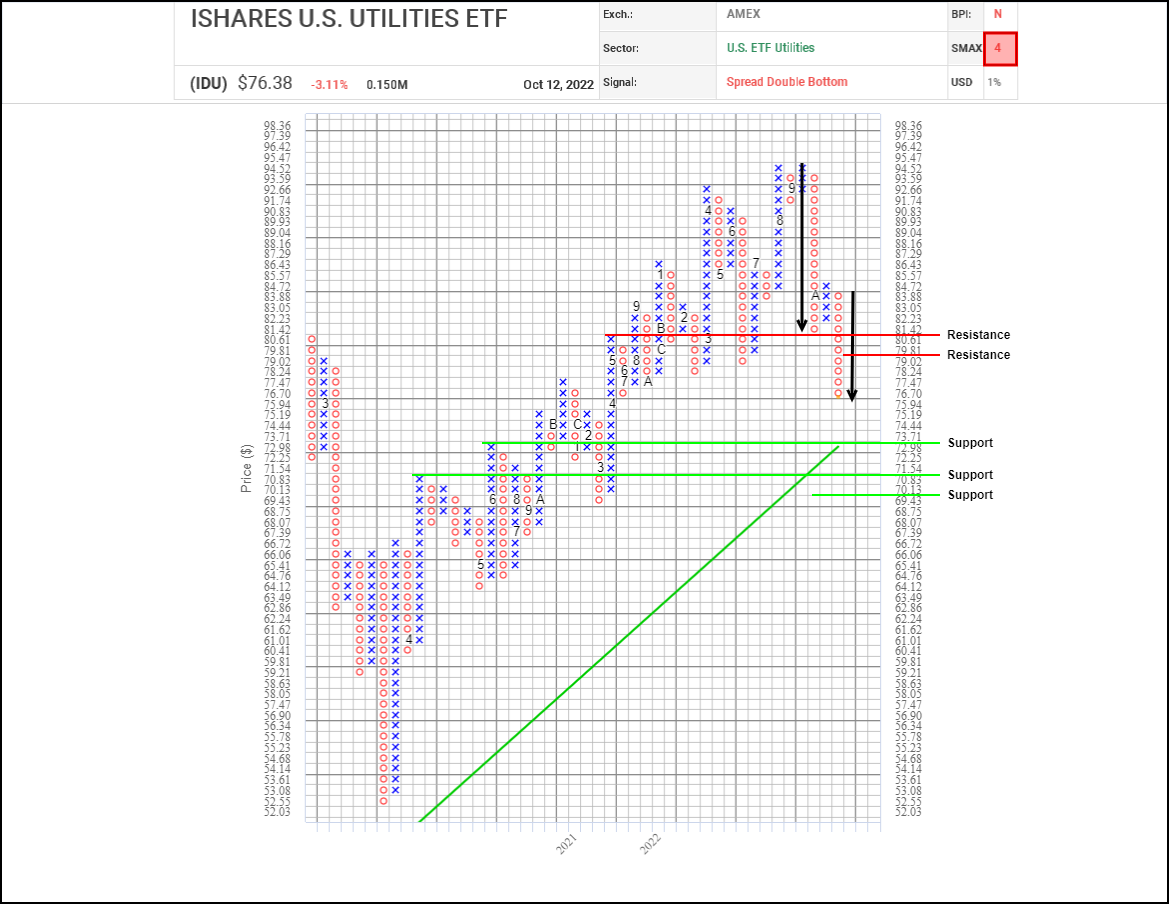 The Utilities sector has been one of the strongest relative performing groups through much of the year, benefitting from its status as a stable, defensive, “value” group in turbulent times. While the broad market declined sharply through much of this year, the iShares US Utilities ETF (IDU) was hitting and retesting all-time highs as recently as August and September.

It now appears, however, that the tide has turned. The prospect of potentially more interest rate increases and a broadening market downturn encompassing more sectors has apparently left nowhere to hide.

Since failing to overcome resistance near $95.50 last month, IDU has turned decisively downward, completing two bearish Double Bottom breakdowns, separated by only a 4% bounce, and a bearish Triple Bottom breakdown on a 2% chart. IDU has also snapped two uptrend support lines, signaling the start of a new downtrend.

Initial downside support for IDU appears in the $70.80 to $73.00 range, a zone that includes previous column highs and lows, a long-term 45-degree uptrend line, and a horizontal count, then $69.40 based on a vertical count. Initial resistance on a bounce appears just below the $80.00 based on a 3-box reversal, then a recent breakdown point near $81.40.