As earnings season has ramped up in the US and commenced in Canada, a rebound in North American equities has been gaining traction. Although down over year in many cases, results overall have come in better than analyst expectations and with investors’ worst fears not being realized, a relief rally has started.

The next week brings a flood of earnings reports, economic data and central bank decisions on monetary policy which could potentially have a big impact on markets, with the US midterm election campaign and the Ukraine War continuing on in the background.

The heart of earnings season plays out over the next ten days with hundreds of large cap companies reporting results from both sides of the border, including Big Tech, Big Oil, Big Pharma, Big Insurance, Big Industry, Big Media and more groups. Highlights include Apple and Amazon today, ExxonMobil tomorrow, and then Suncor and Sun Life next Wednesday.

It is also a big week for central bank meetings with most of the majors set to hold meetings between now and next Thursday. The Bank of Canada kicked things off with a 0.50% hike yesterday and the European Central Bank followed with a 0.75% increase. The Bank of Japan meets tonight with investors wondering what Governor Kuroda may do, if anything after being forced to intervene in currency markets several times after the Yen crashed down to 150 against the US dollar for the first time since 1990. Next week, the Reserve Bank of Australia meets on Tuesday November 1st and the Bank of England is expected to launch its Quantitative tightening program that day as well. The Fed meets next Wednesday followed by the Bank of England next Thursday.

The turn of the month also brings a flurry of economic reports starting today with US GDP and tomorrow with US Core PCE inflation, the Fed’s favorite measure. Next week brings manufacturing and service PMI reports, plus payroll numbers for the US and Canada. 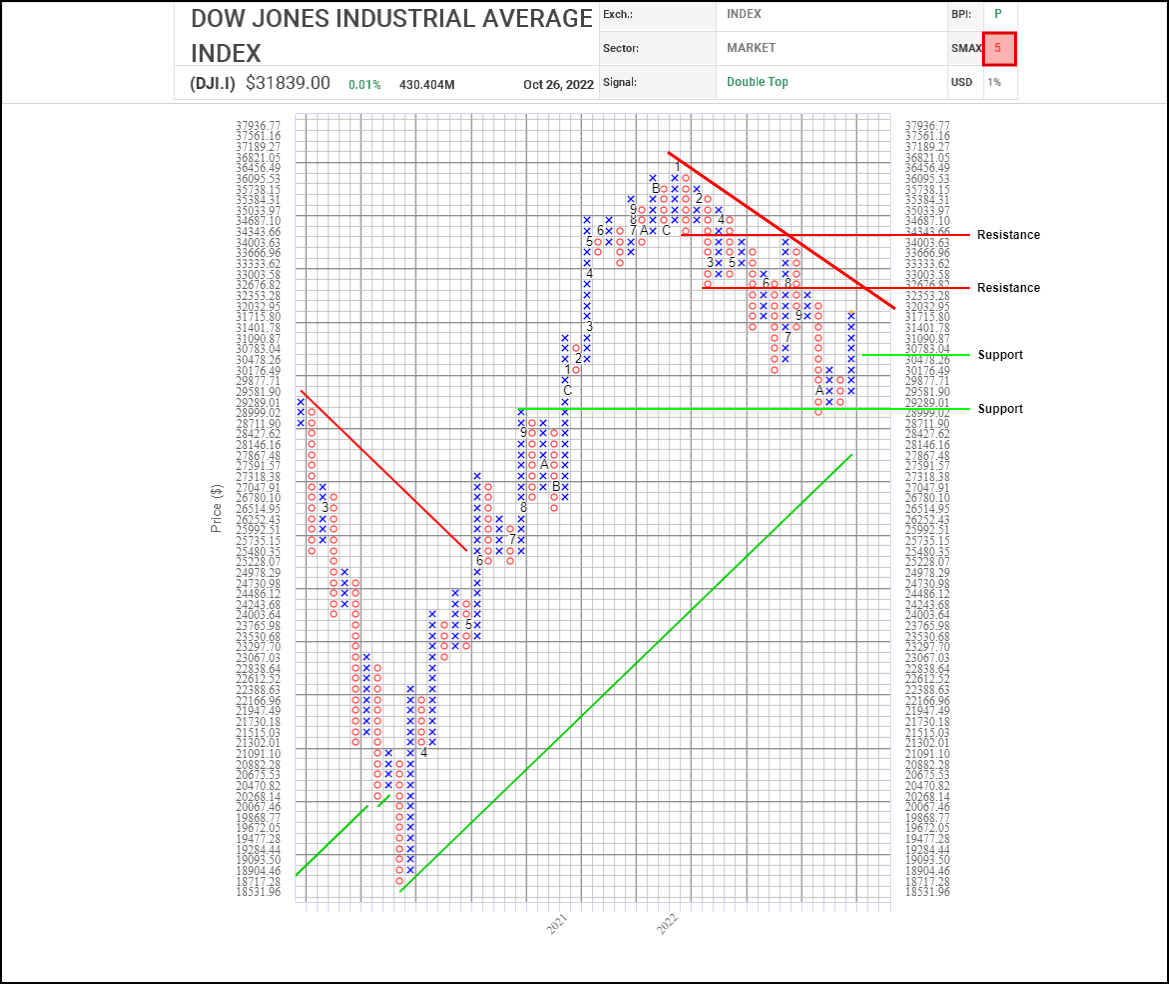 The Dow Jones Industrial Average (DJI.I) has been on an upswing lately. Earlier this month, it bottomed out in a Bear Trap near 29,000 and has rallied back up toward 32,000, completing a bullish Double Top breakout along the way.

On the plus side, the rally in the Dow Industrials has been confirmed by a rally in the Dow Transports (DTX.I) which is currently on a Triple Top breakout. On the downside, even though the current advance has extended into a bullish High Pole, it still appears to be a bear market rally during earnings season, similar to that one that played out back in July-August particularly with the SMAX still in bearish territory at 5.

For this to become a more significant upturn, DJI.I would need to overcome resistance near 33,000 where a round number, downtrend line and a previous breakdown point converge. Should that occur, next potential upside resistance appears near 34,345, around previous column highs and lows. Current support appears near 30,475 based on a 3-box reversal with more possible near the 30,000 round number, or the previous significant low near 29,000. 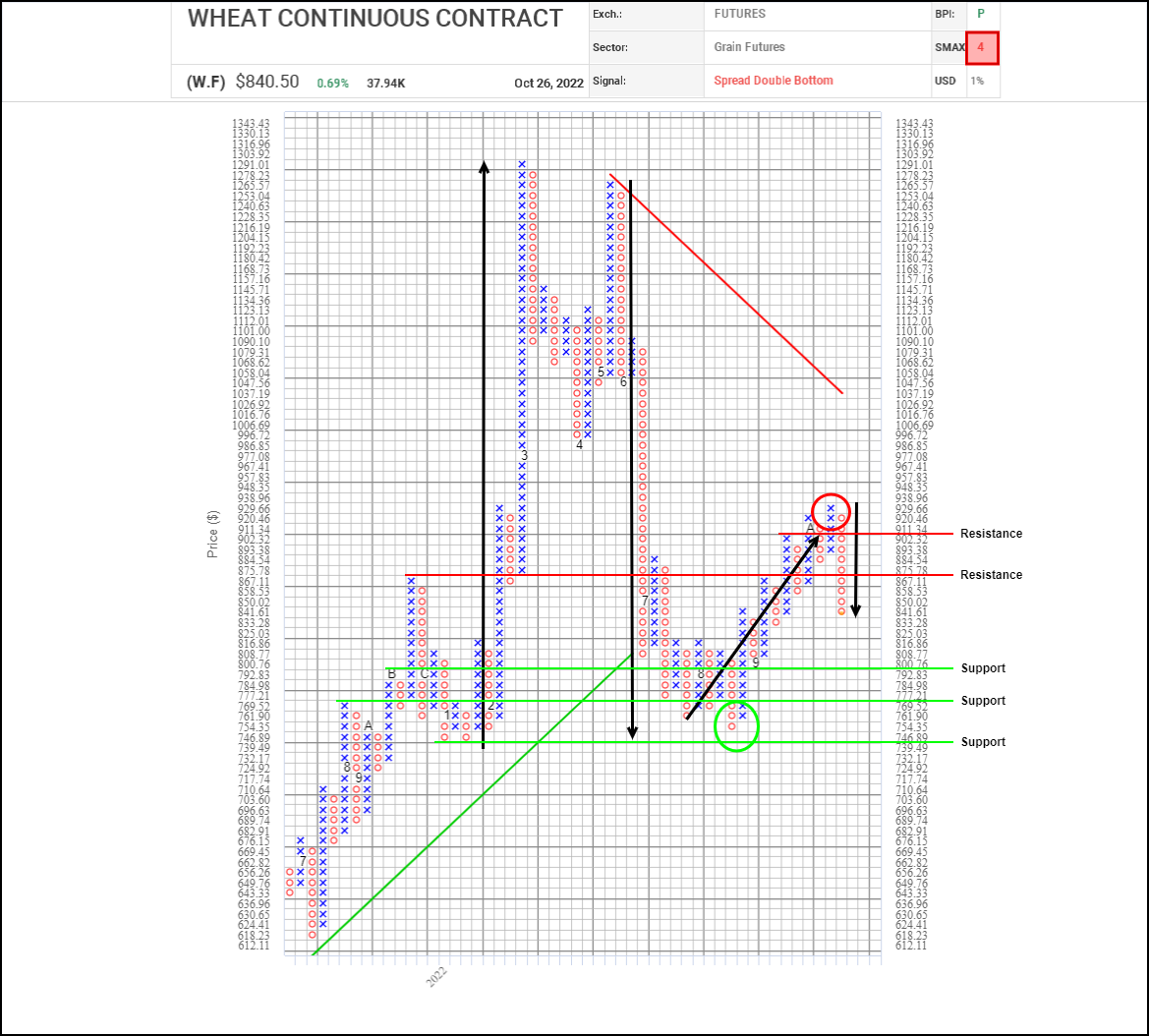 When investors think of commodities, they mainly look at energy and sometimes metals or lumber as there are many mining, forest products/homebuilding, energy producing, and energy service stocks. Agriculture, on the other hand, with few stocks outside of the related fertilizer producers, tends to be ignored by mainstream investors.

Food prices are, on the other hand, of significant interest to consumers, and are a significant component of inflation expectations for consumers and for central banks. While headline inflation numbers have remained high of late, keeping pressure on central banks to keep tightening monetary policy, inflation pressures in some areas has started to ease, grains for example.In addition to crude oil and natural gas, the price of Wheat was influenced heavily in the first part of this year by the War in Ukraine soaring from near 740 up above 1,300 before nearly completing a round trip back to 750 by August as it became clear that Ukrainian grain supply would not be disrupted as much as initially anticipated.

Since bottoming out in a bear trap (green circle) in August, Wheat steadily climbed like an escalator back up above 900. Since peaking in a bull trap (red circle), however, Wheat has started to fall like an elevator, back toward 840, with the completion of bearish Double Bottom and Spread Double Bottom breakdowns confirming the start of a new downleg.Next potential support appears in the 770-800 area based on previous column highs/lows and a horizontal count. Initial resistance appears near 875 based on a 3-box reversal.