It has been a mixed week for equity markets with a big rally last Friday slowly being clawed back since then with traders reluctant to keep the party going while awaiting yesterday’s Fed decision. The US central bank raised the Fed Funds rate by 0.75% as expected. An initial positive reaction to the news from traders hoping the pace of rate hikes could slow in the future was crushed by comments from Fed Chair Powell that the terminal interest rate for this tightening cycle may have to move up to a higher level than previously thought to get inflation back under control.

US index action has been mixed lately. The recent rebound had been led by the Dow and the Russell 2000, an interesting mix of large cap and small cap stocks with the S&P in the middle and the NASDAQ dragging behind. What is interesting about this action is that the Russell gains suggest good breadth to the recent rally while the Dow outperforming the NASDAQ suggests a change of leadership may be underway with Value/Energy taking over from Growth/Technology.

Commodity market action has been neutral to positive lately with Silver, Crude Oil and Natural Gas climbing, while Gold and Copper have held steady. The US Dollar Index recently peaked at another lower high and a new downswing appears to be emerging with the 10-year US treasury note yield slipping back under 4.00%.

For economic and political news, the coming week brings a smaller number of reports but there are still a few with the potential to move the markets. In particular, US nonfarm payrolls and Canada employment are out tomorrow, China trade data comes out Monday, US midterm elections are on Tuesday, and the US Consumer Price Index report is next Thursday. Central bank meetings are done for a few weeks.

Earnings season moves into its later innings with the bulk of US big cap companies having already reported results but US retail and Canadian bank earnings still a few weeks away. There are a lot of small and mid cap stocks reporting but their results tend to have more of an impact in aggregate than a single name moving the markets. Highlights for the coming week, which is dominated more by Canadian companies on the big cap side, include: Constellation Software and Canada Goose tomorrow, Walt Disney and Dupont on Tuesday, Manulife Financial and Rogers Communications next Wednesday and Canadian Tire next Thursday.

In this edition of the Equity Leaders Weekly, we look at Value versus Growth and at the US Dollar versus the Canadian Dollar. 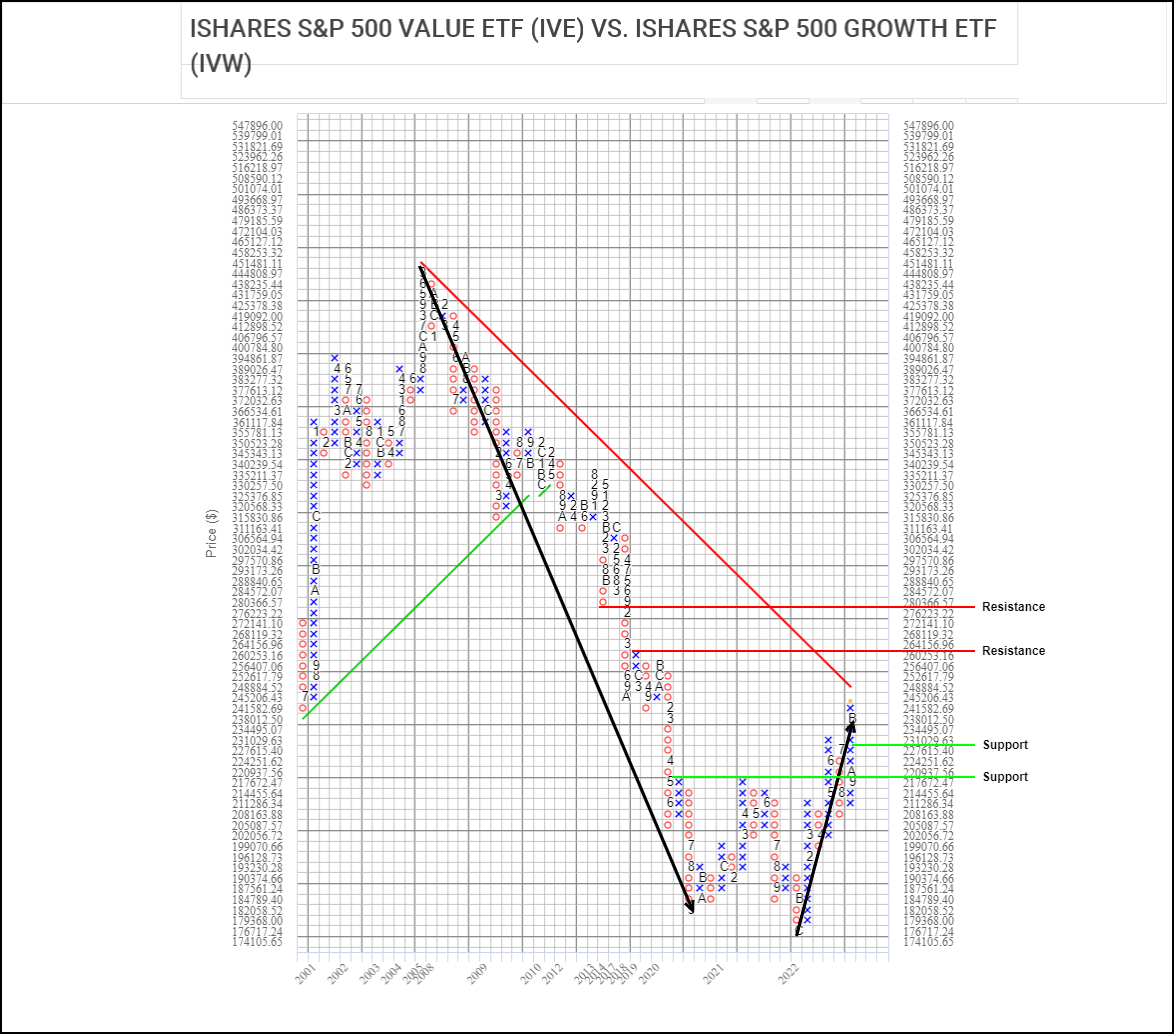 Recent changes in the trend of the iShares Value Index ETF (IVE) relative to the iShares Growth Index ETF (IVW) suggest that a significant change in equity market leadership may be underway.

For nearly all of the last two decades, Growth stocks and sectors were favored over Value stocks and sectors. Growth stocks benefitted from a low inflation, falling interest rate, supportive central bank environment which boosted valuation. This had manifested itself most clearly in the relative outperformance of the NASDAQ index which is more highly weighted in Growth/Momentum Technology and Communications stocks.

In 2022, however, the investing environment has changed dramatically to a rising interest rate, high inflation, and hawkish central bank environment where the cost of borrowing has increased significantly. This change has had a significant impact on equity investors willingness and ability to pay for growth, impacting valuations and also has negatively impacted the financial results of some high profile technology companies. Meanwhile, rising commodity prices and a sluggish economy have favored Value groups including defensive and resource sectors, particularly Energy.

A long-term downtrend in the Value/Growth comparison bottomed out in December of 2021, and this year, the trend has reversed course. Value stocks broke out relative to Growth stocks back in May, had a summer correction and have broken out to the upside again here in November with the Fed remaining hawkish, commodity prices on the rebound, and investors adopting a more defensive posture. 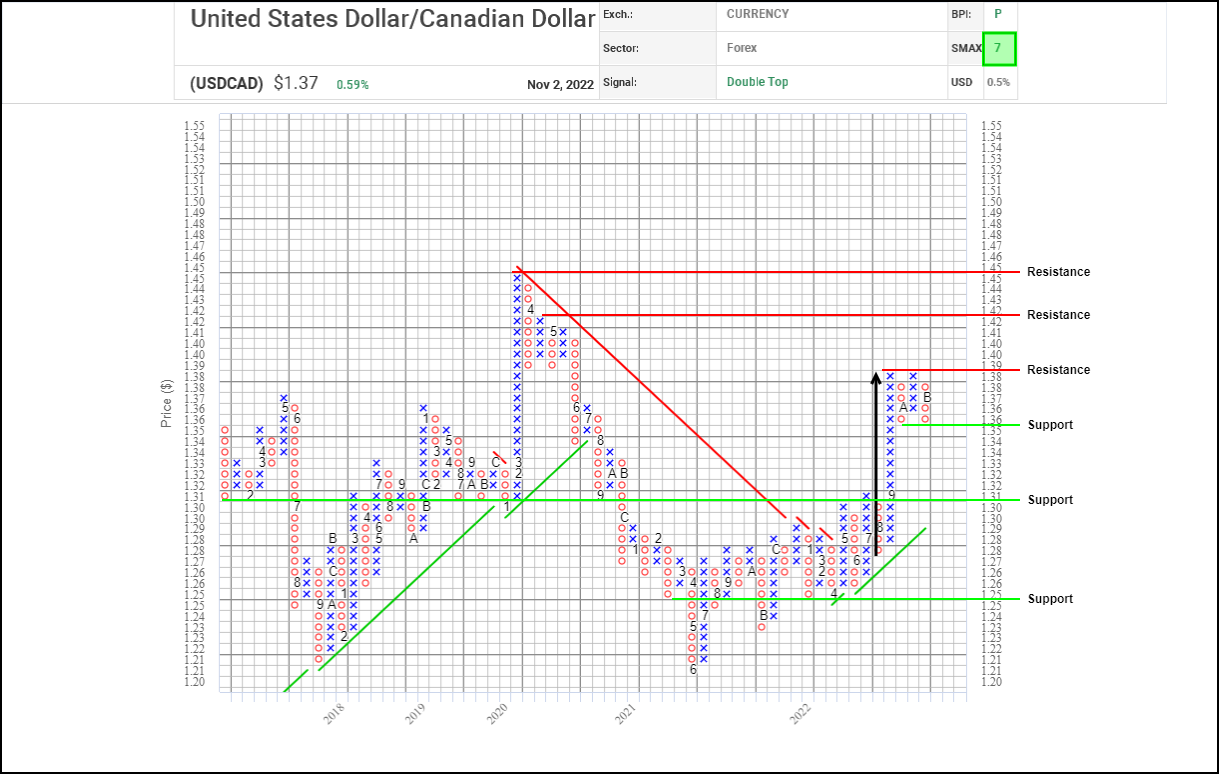 The United States Dollar versus Canadian Dollar exchange (USDCAD) reflects differences in economic conditions and monetary policy between the US and Canada and also can provide insight into the relative strength of US stocks versus Canadian stocks.

Since the summer of 2021, USDCAD has been trending upwards, indicating a strengthening in the US Dollar relative to the Canadian Dollar, a trend that accelerated in September but has levelled off in recent weeks. Much of this is due to the US Dollar outperforming against all other major currencies, driven primarily by the US Fed being seen as leading the trend among central banks toward higher interest rates, and the US, even with its troubles, being seen as an island of stability compared with Europe and China, which have been impacted by war, sanctions, and the continuing fight against COVID.

It should be noted that although the Canadian Dollar has weakened relative to the US Dollar, it has outperformed overseas currencies like the Euro, Pound and Yen for similar reasons to the US Dollar, a more stable North American economy and, until recently, a relatively hawkish Bank of Canada.

The Canadian Dollar also tends to be influenced by commodity prices and two periods this year where CAD outperformed relative to USD for a short period was in March and June, times when energy prices were rallying. CAD also outperformed in August when the Bank of Canada accelerated interest rate increases, but it has underperformed lately as the Bank of Canada slowed rate hikes.

USDCAD has paused recently in a $1.3500 to $1.3900 range with the Fed still more hawkish than the Bank of Canada (which helps the USD), but energy and metal prices on the rebound (which is generally helpful for CAD). Whichever direction the pair breaks from this range could set the next trend, either upward toward a retest of the 2020 peak near $1.4500, or back downward toward the $1.2800-$1.3000 range where the recent rally started.