In the last Equity Leaders of 2022, stocks surged yesterday as investors cheered a surprisingly strong reading on consumer sentiment. The Consumer Confidence Index for December rose from last month’s level and easily topped expectations meaning consumers are slightly less worried about inflation. FedEx (FDX) and Nike (NKE) each reported earnings yesterday that topped analysts’ forecasts. Could we see a Santa Claus market rally to finish 2022 on a positive note? All is not well in real estate though as existing home sales in the US tumbled 7.7% in November, a larger drop than forecasted and is the tenth straight month of declining sales. Ukrainian President Volodymyr Zelensky visited Washington D.C. yesterday addressing a special session of Congress and holding other meetings. This was the first known trip outside of his country since the Russian invasion in February 2022 and marks 300 days since the invasion. The Ukrainian leader hoped to “strengthen resilience and defense capabilities” and to discus further cooperation with the US going forward. In this edition, we will take a look at the Aerospace & Defense sector in light of Ukraine’s president visit to the US and the US Dollar vs. Japanese yen reversal in light of the Bank of Japan’s recent policy decisions. 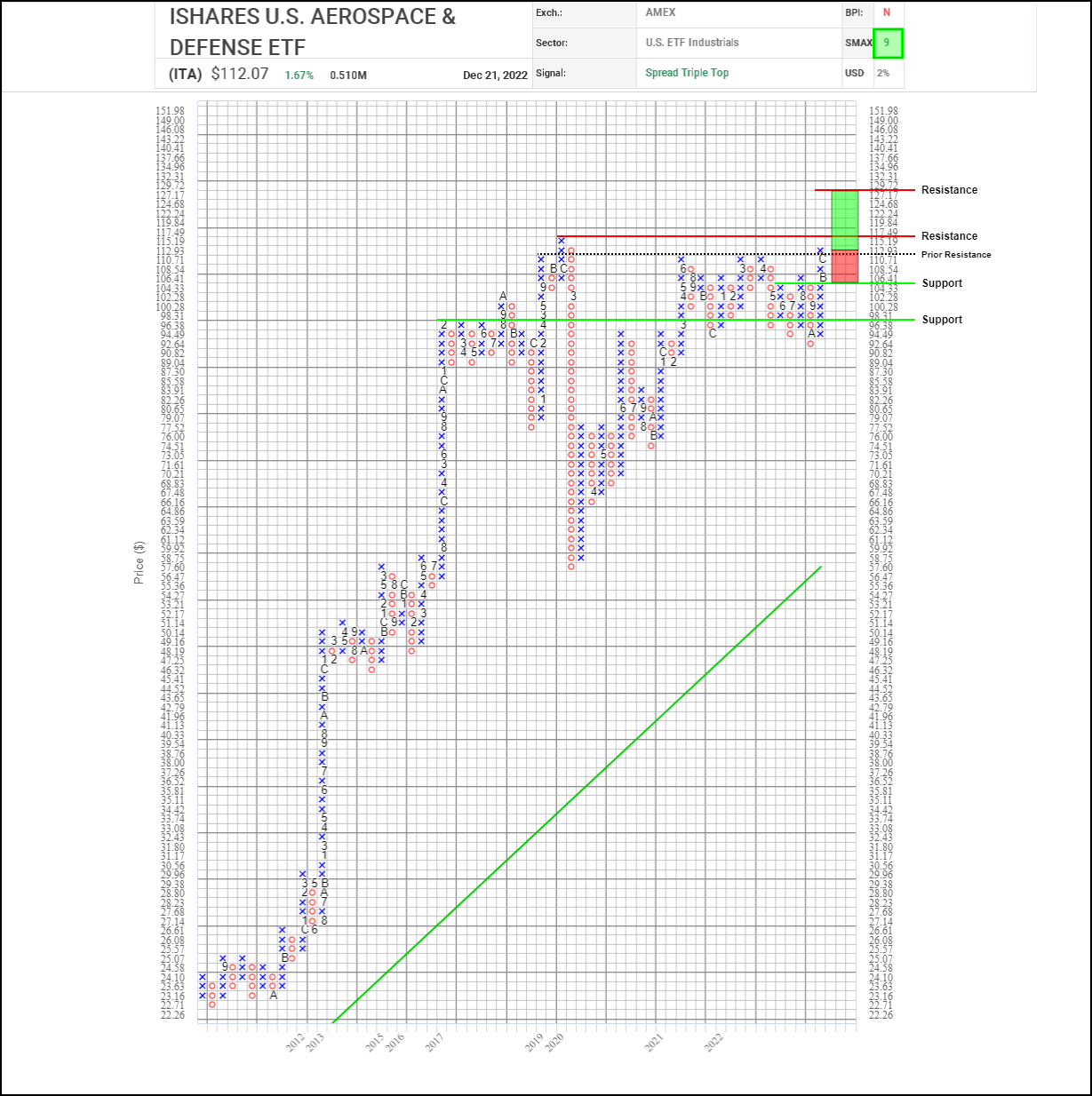 The Ukrainian president’s visit comes at a time when US lawmakers are debating the passage of more than $1.7 trillion fiscal 2023 spending bill that includes more than $45 billion in assistance which could deliver a Patriot missile battery system to help Ukraine bolster its defenses this winter against aerial attacks. Zelensky stated in his address in his call for continued financial support from the US saying “Your money is not charity. It is an investment in the global security and democracy that we handle in the most responsible way.” Looking at how this visit might relate the the Aerospace & Defense sector going forward.

The iShares U.S. Aerospace & Defense ETF (ITA) has been in the Favored zone of the US Equity Specialty ETF Report for almost 200 days and has seen a strong move upwards of ~15% in the last quarter.

Now there is major resistance above at its prior high from December 2019 at $117.49. As it sits right now in a spread triple top point and figure chart pattern, it could challenge this level in light of potential continued support from the U.S. government to support the Ukraine war.

A move above this level could see resistance at $129.72 come into play.

US Dollar vs. Japanese Yen (USDJPY) 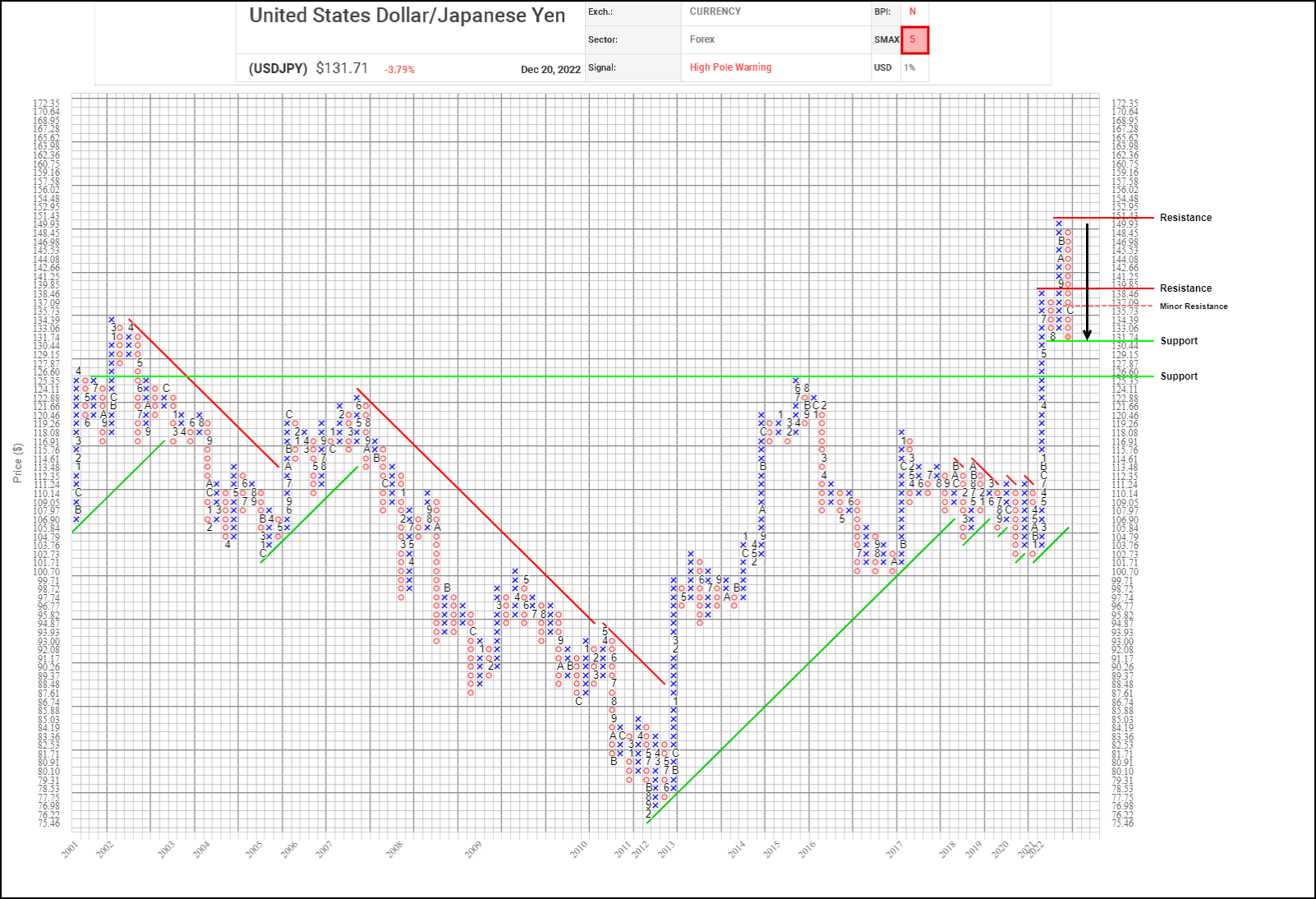 This week, the Bank of Japan (BOJ) held its benchmark interest rates steady and announced it will modify its yield curve control band expanding the range. The BOJ will expand the range of 10-year Japan government bond yield fluctuations from its current plus and minus 0.25% to plus and minus 0.5%. The adjustment is intended to "improve market functioning and encourage a smoother formation of the entire yield curve, while maintaining accommodative financial conditions," the BOJ said. Bank of Japan Governor said the central bank will not hesitate to further ease its monetary policy if necessary. The Bank of Japan offered to purchase 600 billion yen in Japanese government bonds with a maturity range of one to three years. As a result of these statements, the Japanese yen strengthened against the US Dollar after the announcement earlier this week. So where does it go from here? Looking at the point and figure chart for the US Dollar vs. Japanese yen (USDJPY) at a 1% scale, we can see the yen has indeed improved against the US Dollar significantly over the last month. Even though the US Dollar is still outperforming the yen by about 15% YTD, the yen has reversed course from its peak in November about 15% versus the dollar down to the support level at 130.44 which it held in August of this year. A move through this level could see support at 125.35 come into play.

If it sees support hold, resistance above can be found above at 139.85. Further resistance can be found at the high from November at 151.43, which is unlikely with the new policies and tone of the Bank of Japan further easing of monetary policy unless something changes.