The holiday season has been a difficult one for equity markets, especially in North America. As news flow slowed and volumes dried up, stock markets struggled through the last few days of 2022 and the typical seasonal Santa Claus Rally did not materialize. As the calendar flipped into 2023, a New Years Rally has emerged in several Asia Pacific and European markets, but equity market momentum has faltered in North American trading hours.

The market retreat has been broad based across sectors with traditional defensive sectors such as utilities and consumer staples falling less, while the technology, real estate and energy, including alternative energy, sectors have come under particular pressure lately.

Commodity action has seen energy and lumber come under pressure as concerns about future demand remain an issue. Metals have been strengthening lately, particularly precious metals, which have benefitted from a general retreat in the US Dollar.

This week remains a busy one for economic news headlined by US ADP payrolls on Thursday followed by US Nonfarm Payrolls, Canada jobs and wage inflation numbers for both countries on Friday. Next week starts off slow for news then picks up with US consumer price inflation on Thursday the 12th, followed by the kickoff to earnings season with four big banks reporting results on Friday the 13th.

In this edition of the Equity Leaders Weekly, we look at the evolving relationship between the price of crude oil and oil stocks, and at what the Australian/Canadian Dollar relationship tells us about changing sentiment and global capital flows. 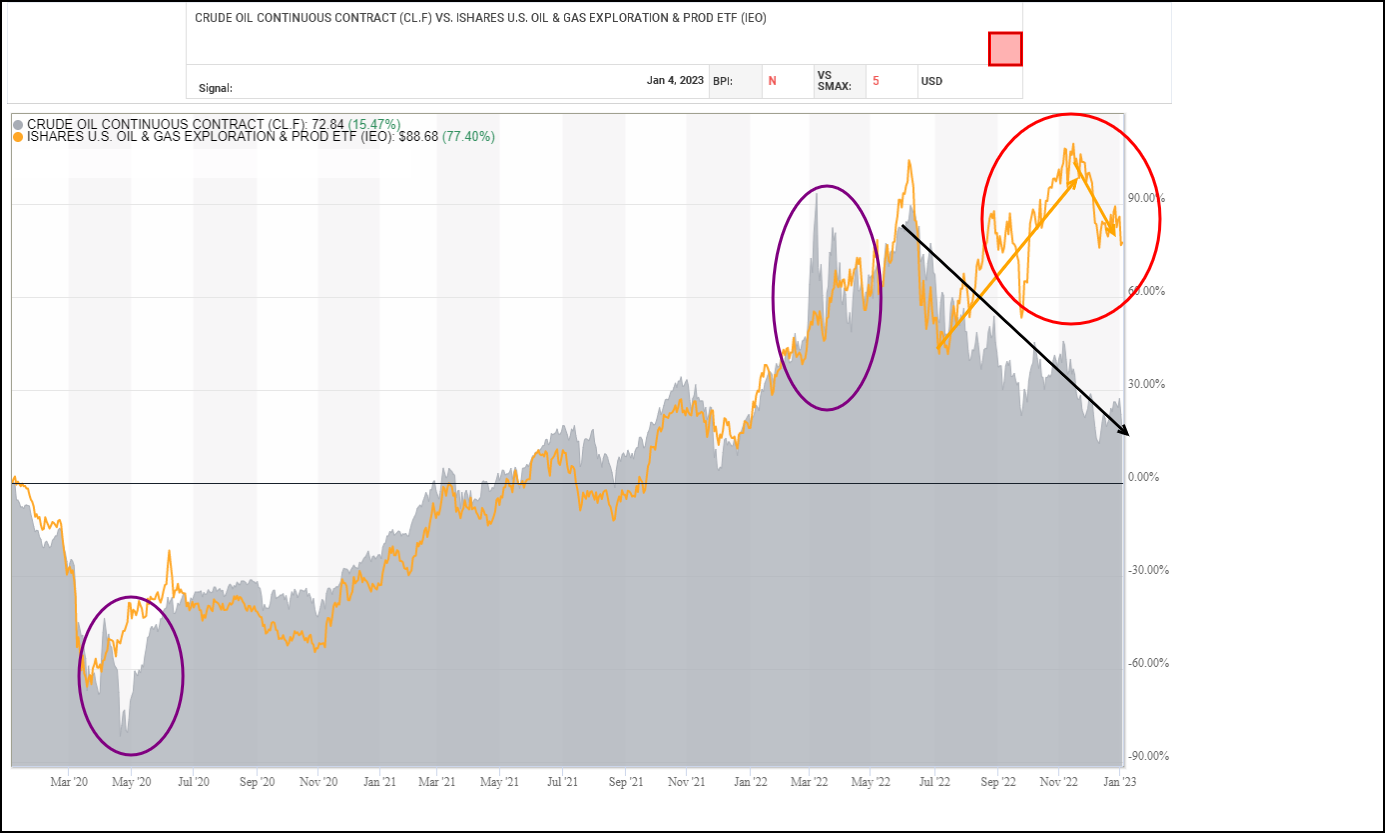 In the November 10th edition of the Equity Leaders Weekly, we highlighted long and short-term factors influencing the relationship between the US Crude Oil price (CL.F) and energy stocks, represented by the iShares US Oil & Gas Exploration & Production ETF (IEO). At that time, we noted that a large divergence had opened up between the price of oil and oil stocks which historically had been closed by the oil price moving back into line with energy stocks (purple circles).

Over the last two months, the price of oil has continued to trend downward (greyline and black arrow), while energy stocks through IEO have shown signs of a shift in momentum with a pending bearish Head and Shoulders Top pattern (orange circles and orange arrows) emerging with a head at the mid-November peak and shoulders in August and December.

The longer this gap remains open, the larger the potential for a scenario where the oil price takes the leadership role, as occurred between the summer of 2020 and the fall of 2021. In this case, energy stocks could potentially be vulnerable to a gap closing move to the downside, or the two markets could possibly converge to meet in the middle somewhere.

Although as resource exporting countries there are similarities in the economies of Australia and Canada, there are also significant differences and because of this, a look at the Australian Dollar versus Canadian Dollar (AUDCAD) currency pair can provide significant insights for investors into the state of the global economy and capital flows.

The chart shows that for the last two years, the Australian Dollar weakened relative to the Canadian dollar which could be attributed to a combination of the North American economy outperforming Asia Pacific (and European) economies, and because the Bank of Canada started raising interest rates sooner than the Reserve Bank of Australia and has continued to raise rates higher and faster.Last month, the trend in the relationship within the currency pair shifted significantly with AUDCAD breaking out of a downtrend and completing a bullish Triple Top breakout. This action suggests one or more changes may have occurred. First, both countries’ central banks have suggested they may slow the pace of interest rate increases in future. Second, the COVID depressed Chinese economy may be poised to bounce back if reopening measured continue to take hold. Third, energy prices have been coming down in recent months, while metal prices have been climbing, particularly Gold, Platinum, and Copper. This last shift can also be seen in equity markets with the US Country ETF for Chile (ECH), a big Copper producer rallying at a time when the country ETFs for big energy producers like Saudi Arabia (KSA), Qatar (QAT) and Indonesia (EIDO), have been retreating.