Equity market confidence has eroded over the last few days. While the threat that more sanctions could be levied on Russia over the Ukraine war has impacted European market action, here in North America, the focus of investors has turned back to the growing headwind of tightening monetary policy.

The key recent moment which appeared to turn investors heads was a speech from Fed Vice Chair Nominee Lael Brainard, long knows as one of the most dovish members of the Fed. Brainard indicated that the Fed needs to get more aggressive about fighting inflation and hinted that the US central bank could accelerate rate hikes and start shrinking its balance sheet as soon as its next meeting in early May.

Her comments sparked a rally in US traded interest rates and the US Dollar and put new headwinds in front of US bonds and US stocks. Meanwhile, commodity prices remained steady at high levels suggesting that inflation is unlikely to go away any time soon without significant intervention. Most notably, the Dow Jones Transportation Average, which was one of the first indices to turn back upward last month, turned back downward this week.

There are three central bank meetings scheduled for the coming week, the Reserve Bank of New Zealand on Tuesday, the Bank of Canada on Wednesday and the European Central Bank on Thursday. The Canadian media has already been speculating on a potential 0.50% rate hike, up from last meeting’s 0.25% interest rate increase. The upcoming week’s meetings may give investors a sense of the mood of the room while waiting for the Fed.

The coming week also brings US inflation reports which may also indicate how much pressure the Fed is under to act more aggressively against inflation. Ahead of the Bank of Canada decision, we have the Canadian federal budget today and Canadian employment tomorrow.

Earnings season kicks off next week with several results from big US banks and brokerages. One of the few positives for equities this week has been that confession season has been extremely quiet so far suggesting that corporations may generally be on track to hit their forecasts with few major disappointments as of yet.

In this week’s issue of Equity Leaders Weekly, we look at the implications of a major trend change in the US 30-year treasury yield, particularly for the homebuilding sector. 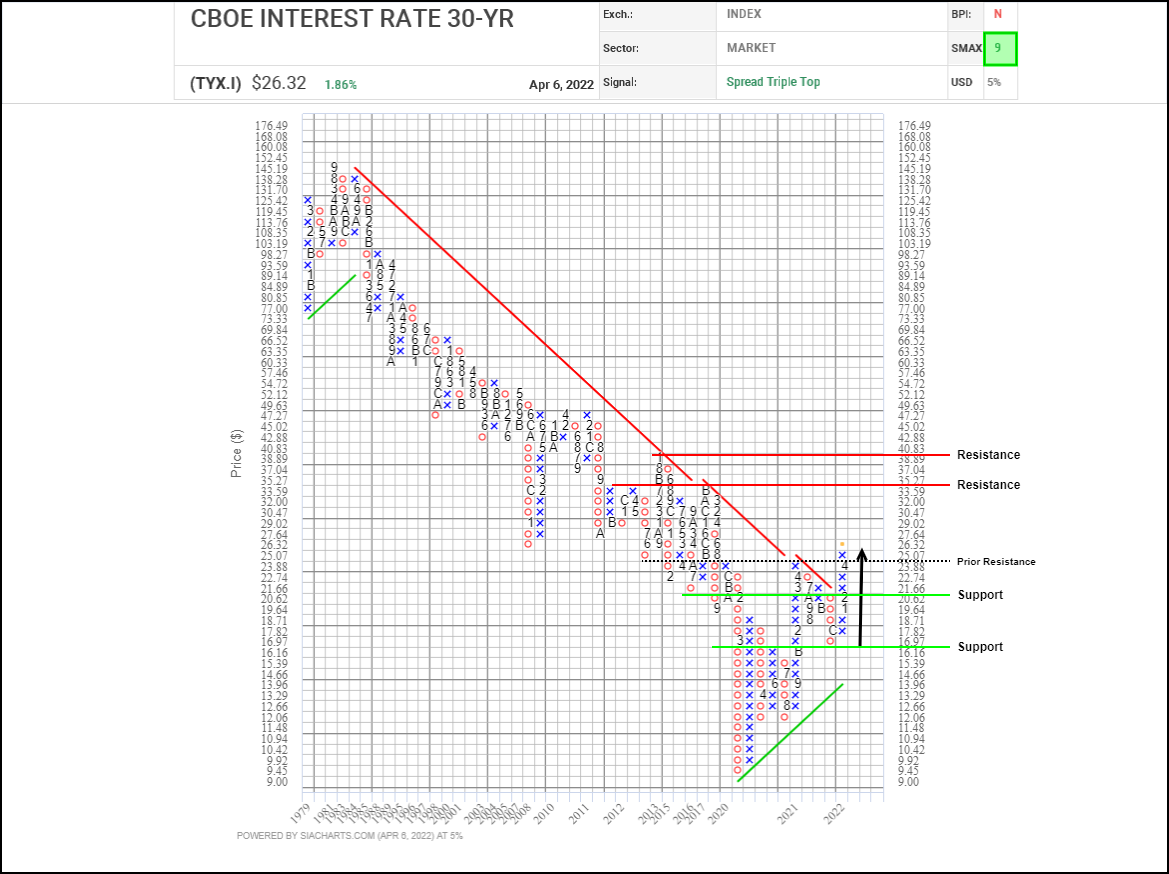 Based on this chart, it looks like the 40-year downtrend in US long-term interest rates has ended.

Since peaking in 1981, the CBOE 30-year interest rate contract (TYX.I) steadily declined in a falling channel of lower highs and lower lows. It appears this downtrend bottomed out two years ago below 1.00% in the March 2020 global market washout. Since then, TYX.I has been rebounding within the channel but recent moves suggest that this upturn has become more substantial.

Based on previous column highs, next potential resistance may appear near 3.50% or 4.00%. Initial support appears near 2.00% based on a round number and a 3-box reversal. 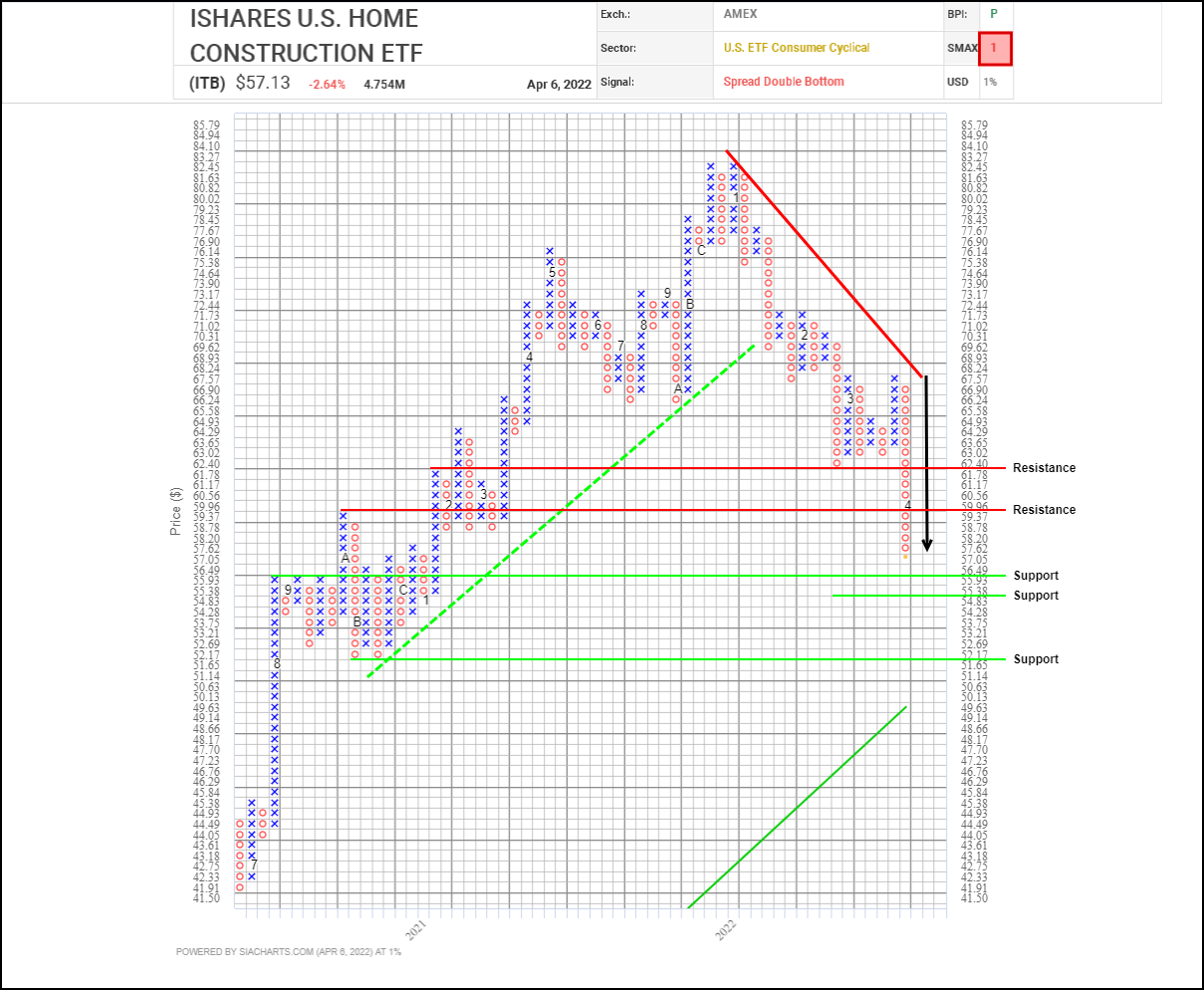 The recent rise in US traded interest rates has had a particularly significant impact on homebuilding stocks. The iShares US Home Construction ETF’s (ITB) peak late last year coincided with the most recent low in TYX.I. Just as interest rates have been on the rise since the start of this year, ITB has been on the decline with an emerging downtrend of lower highs and a series of bearish pattern completions signaling that the sector has come under distribution.Most recently, ITB has completed bearish Triple Top and Spread Double Top breakdowns, and a bearish Low Pole has emerged as the ETF falls to levels last seen in late 2020. Next potential downside support levels on trend appear near $55.90, based on a previous breakout point, $54.80 based on vertical/horizontal counts, and $51.65, based on previous column lows. Initial rebound resistance appears near $60.00 based on a round number and a 3-box reversal